When I think about it, this morning was one of my busiest as Run Director here in Tralee! We had a newly-wed couple and their wedding party, we had four parkrunners joining the coveted 100 club and three parkrunners hitting the 150 parkruns milestone! That and much more! 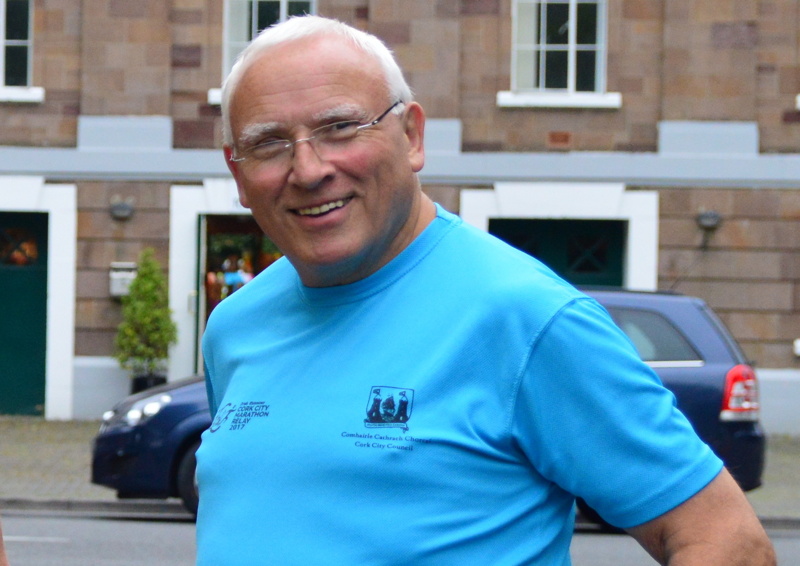 Like most Saturday mornings, I landed down in the Town Park only to find John Robinson had already arrived. Thanks so much to John, Pat and Tony for all their help in setting up the parkrun this morning. Everything was setup and ready to go by 8.30am! What a team! 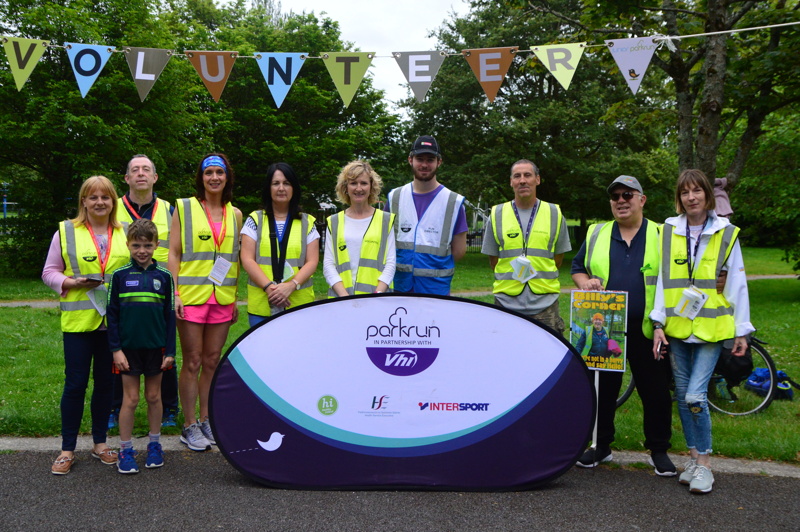 A mighty big thanks to all our volunteers who started arriving from 9am onwards this morning. Our barcode scanners and timekeepers continued with the use of the parkrun Virtual Volunteer smartphone application. It makes processing the results after the parkrun so much quicker! 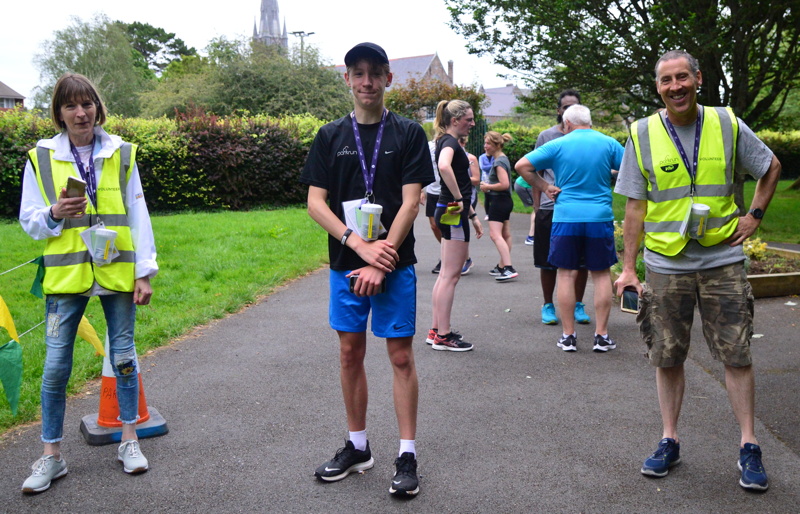 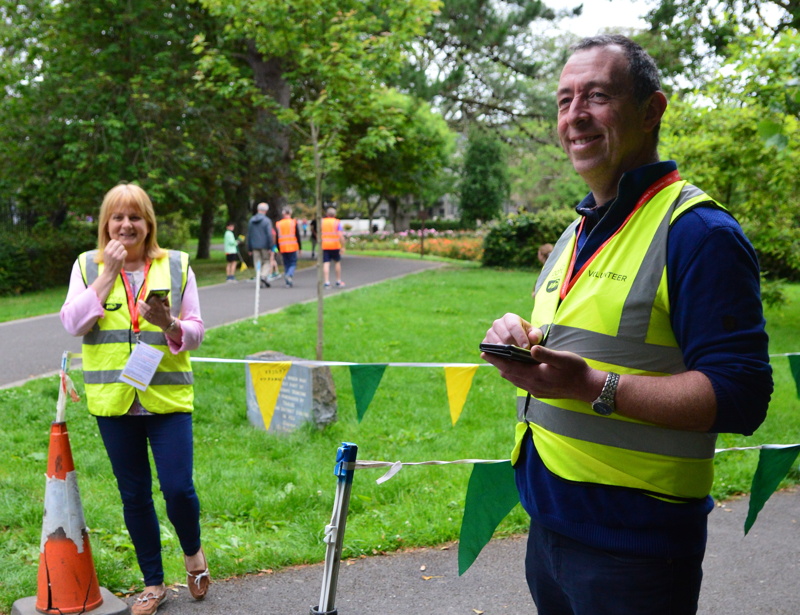 Monica and James were on Timekeeping. 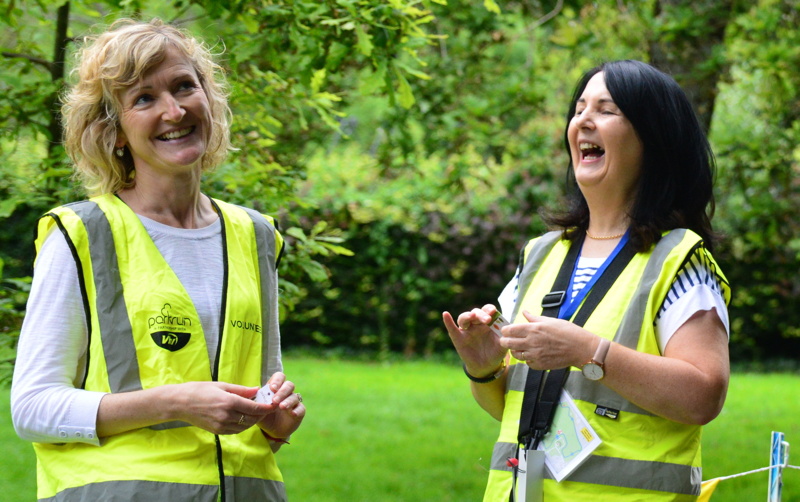 Tracey and Majella were on Finish Tokens. 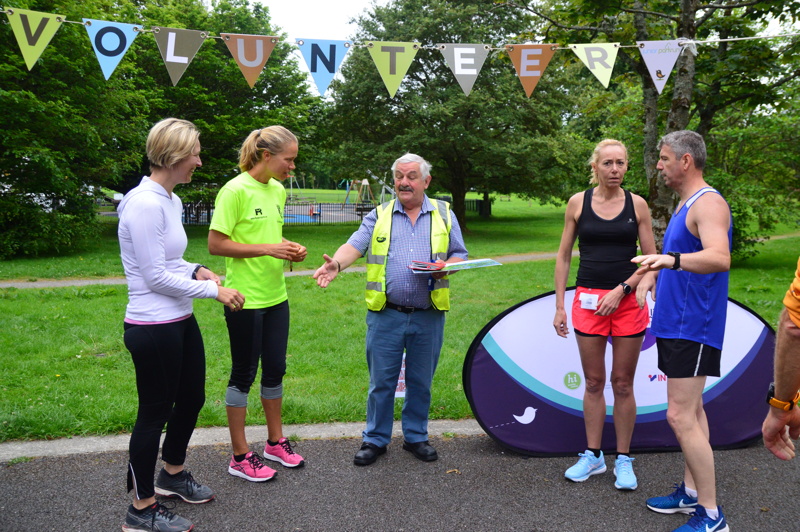 Sean Lyons gave the First-Timers briefing to all our 11 first-timers to parkrun and our 23 parkrun tourists! 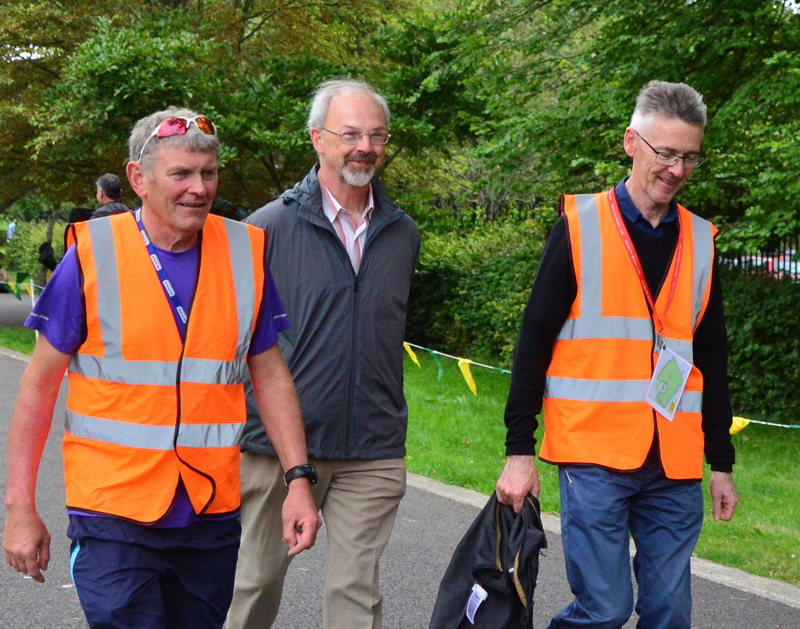 Tom and Gerard were our Tail Walkers this morning and made sure everyone made it around the course safely. 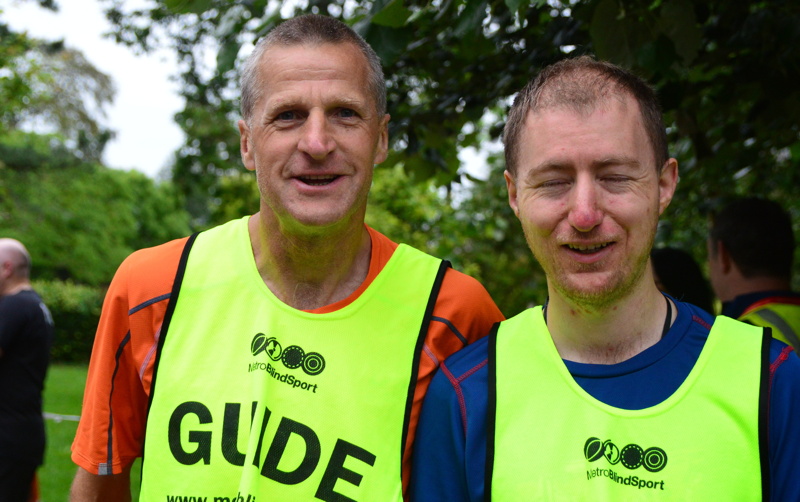 Niall Coppinger, Event Director of Bushy parkrun, Dublin was visiting Tralee parkrun for the first time this morning. He also volunteered as a VI Guide for Ross.

Mary Kilkenny-Barrett was guiding Mairead this morning and they were the dream team! A big congratulations to Mairead who set a new PB for herself this morning! That’s seven PB’s so far this year.

As well as Mairead, we had 24 other parkrunners achieve a PB this morning! Well done!
We had lots of parkrun tourists this morning! These included Sean Griffin from Hartstown, the McLoughlin family from Vicarstown, the Moran family from Naas and Lena Wolff from Nordestedt, Germany. Also joining us this morning for some parkrun tourism was Ryan Levart, Margaret O’Connell, Rachel Griffin, Noreen Moriarty, Pat Boyce, Siobhan Devane, Jane and Ger O’Connor, Ann Flaherty, Patrick Kelly, Conor O’Brien, Emaon Mcaloran and Jay Singh. 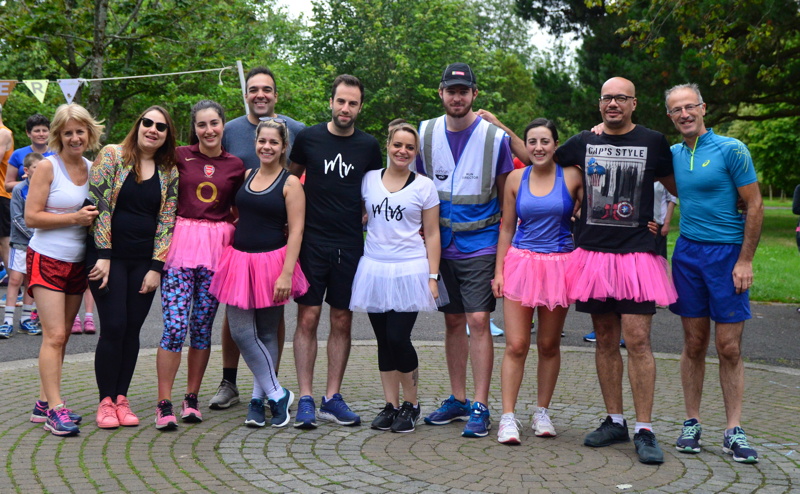 One of our big highlights this morning was the rare occasion of two of our parkrunners getting married! Adam and Emilly exchanged vows yesterday afternoon and then got up early this morning to join us for parkrun. They even brought along a large contingent from their wedding party! I welcomed their friends and family to the briefing and then presented them with a little memento from all of us here in Tralee parkrun.

We then moved onto this morning’s milestone certificates. We had 4 people joining the 100 Club this morning. That’s 500km of parkruns! These included Madeline Brosnan, Kate Reidy, Peter Jackson and Colm Nix. Well done to all four on reaching this incredible milestone!

We then moved on to our final presentation this morning; the 150 Club. While it’s not an official parkrun milestone, we still like to recognise this magnificent achievement by our parkrunners. Each person to reach this milestone receives a collage of photos from their time at Tralee parkrun thus far. As I said in my briefing, this is 750 kilometres of parkruns! Just to put that into perspective; it’s like running/walking from Tralee Town Park to Donegal… AND BACK! 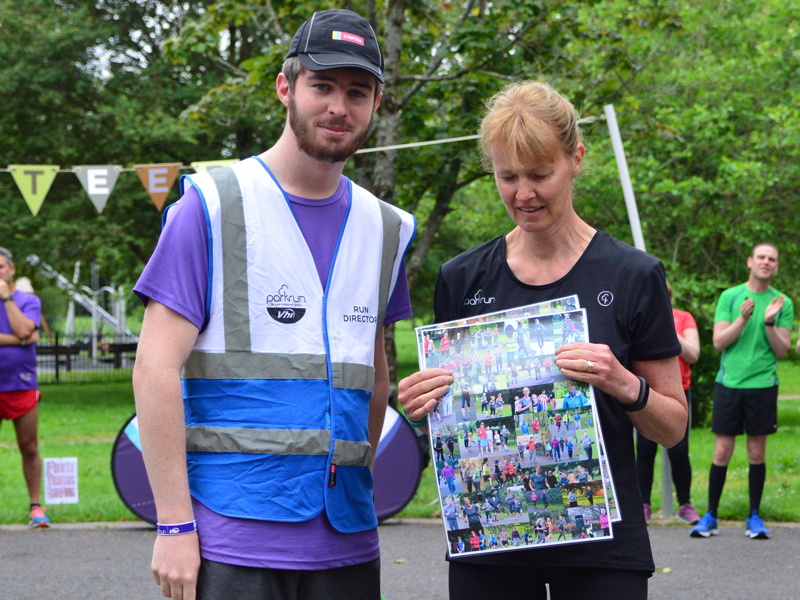 This week, we had three parkrunners reach this milestone. First up we had Bettina Hoare. Bettina is a super loyal Tralee parkrunner, having completed 149 of her 150 parkruns here in Tralee! You’re probably wondering where she ran her 1 other parkrun...I was too! Looks like Bettina was over in Sweden a few weeks ago, checking out the course in Malmö Ribersborg parkrun for us, prior to our New Year’s Day Double (NYDD) trip next December! We’ll be travelling over there and we’ll be doing two parkruns, one in Denmark and one in Sweden… all in one morning (NYD)! 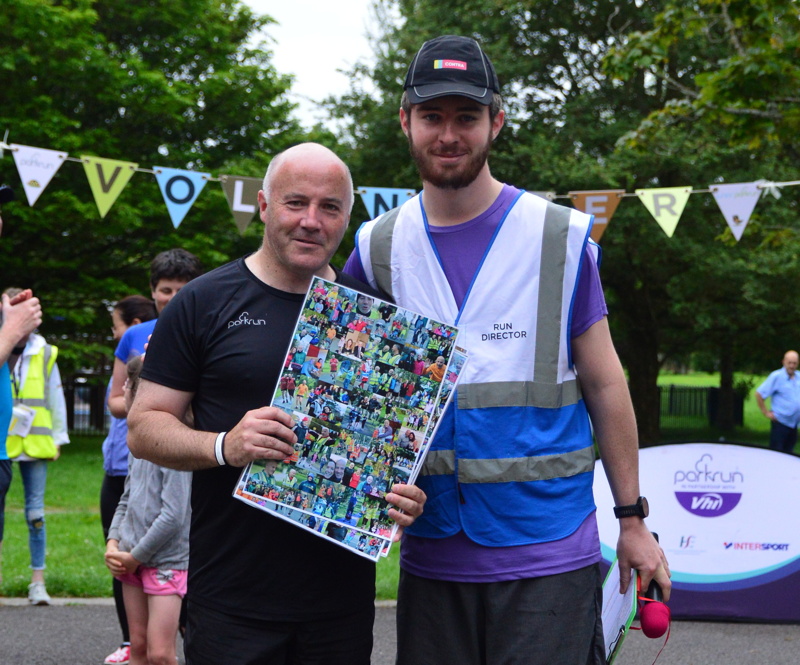 Our final two parkrunners to join the 150 Club were none other than Colm and Caroline Lynch! Both are Run Directors here at Tralee parkrun, as well as Caroline being our Tralee junior parkrun Event Director. An interesting fact about these two; not only have they both ran 150 parkruns but they’ve also volunteered a combined 338 times at parkrun! Well done again on this magnificent achievement!

With all our presentations out of the way, it was now time to get our parkrun underway. Even with all our wonderful milestones and wedding party, we started the parkrun bang on 9.30am! Well done to all who 276 people who walked, jogged or ran our parkrun this morning. 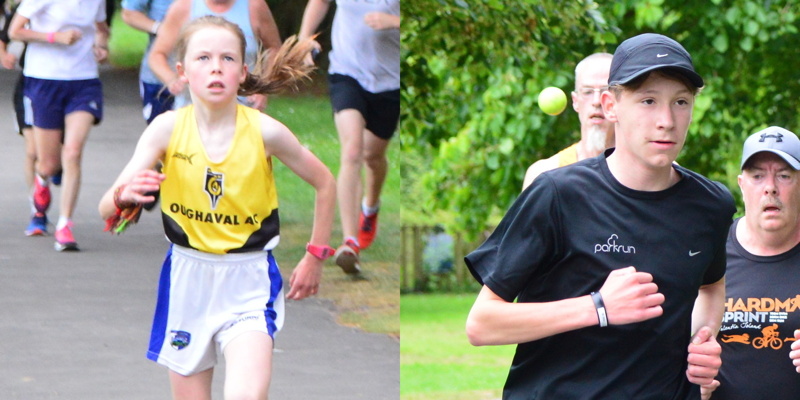 Our first female finisher this morning was Della from Vicarstown and our first male finisher was Oisin. All the results from the week are here and there are LOTS of photos on our Facebook page!

That’s it from me! Tom is Run Director next week so you’ll all be in safe hands!