What an amazing week for parkrun in Tralee, and not just in Tralee, but all over the country! No less than seven parkruns in ten days, including two junior parkruns on Christmas Eve and New Year's Eve. And it all reached a climax with the amazing New Year's Day Double between Listowel and Tralee, but involving people from all over Kerry and much further afield. I was privileged to be involved in all of the runs, although I was a tourist for the Christmas Day run, I ran three times and was volunteering in one capacity or another for the other four.

But this report is about the Tralee half of the Double. You can read Tim Segal's report on the Listowel half here. 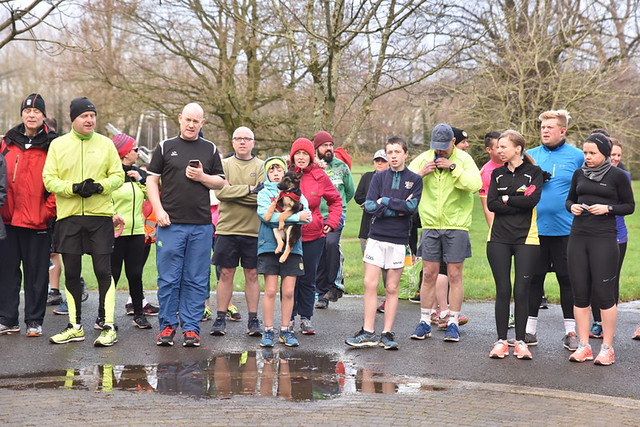 The briefing was easy. I just asked if people remembered Tim's briefing from Listowel, and said "What he said. Except the other way around!" We didn't want the runners from Listowel doing their three laps anti-clockwise while we were running clockwise.

Maybe asking "Are there any tourists?" wasn't necessary! I was drowned out by shouts - mostly from Listowel, of course, but also runners from Newcastle West, St. Anne's, Ardgillan, Lees Road and a few from the U.K.

Over eighty runners did the Double - New Year's Day is the only day of the year when you can register two parkrun - and a dozen more volunteered at one and ran the other. We even had Tralee runners volunteering in Listowel and vice versa. Both parkruns went like clockwork and there was plenty of time to travel safely between the two Town Parks. 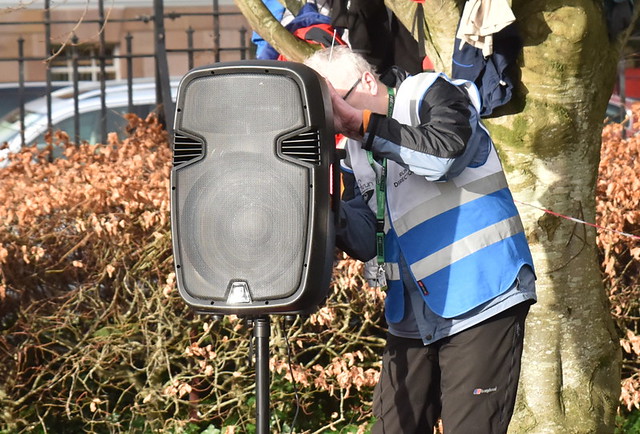 We had a musical soundtrack which recalled the celebrities who had passed away in 2017, so it included tracks by Glen Campbell and Tom Petty, as well as theme tunes from "Mannix" and "The Riordan's"! Something for everyone (well, something for everyone over 50!) It even included the famous clip of Jimmy Magee commentating on John Treacy's silver medal finish in the Olympic marathon, appropriate for the occasion! 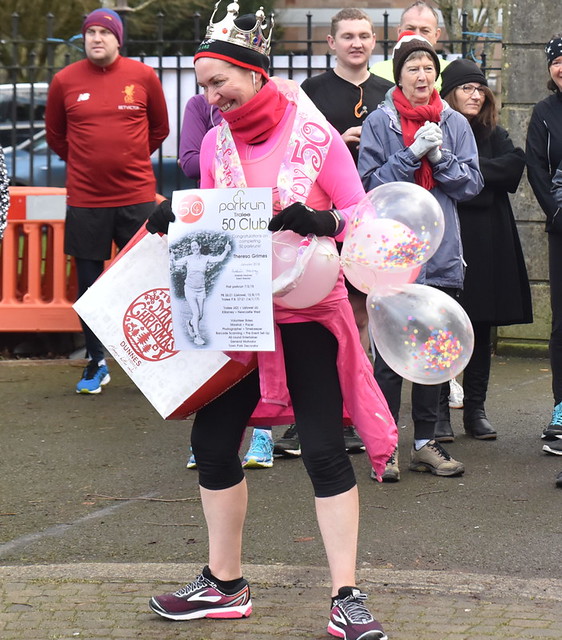 We did have celebrities of our own of course. Theresa Grimes may be defecting to North Korea - sorry, North Kerry - as she'd done a good few runs recently in Listowel (in between marathons and longer!). She could well be a defector. It's well known that she has nuclear capabilities in her arse-nal. So her fiftieth kind of snuck up on us, but it couldn't pass unmarked. Her friend Margaret Wharton couldn't make it yesterday but did send some suitable gifts to mark the occasion. 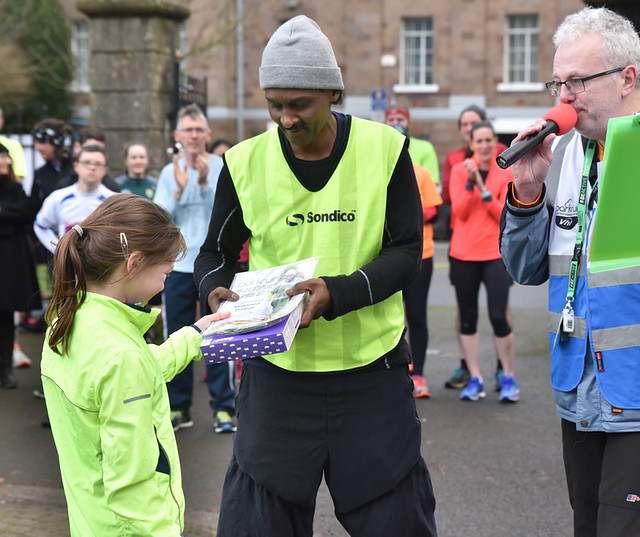 It was my great pleasure to present Mohamed Eldahab with a certificate for park runner of the month, Mohamed was nominated by his fellow runners to thank him for his great contribution to parkrun. As well as being a great evangelist for parkrun - he has enticed numerous people to try it out - he always offers his services to help out, even when he isn't on the roster. I had the delight of meeting Mohamed's family in Sudan recently, and discovered that his full name - Mohamed Swar Eldahab - means "golden bracelet". How appropriate - he's pure gold. 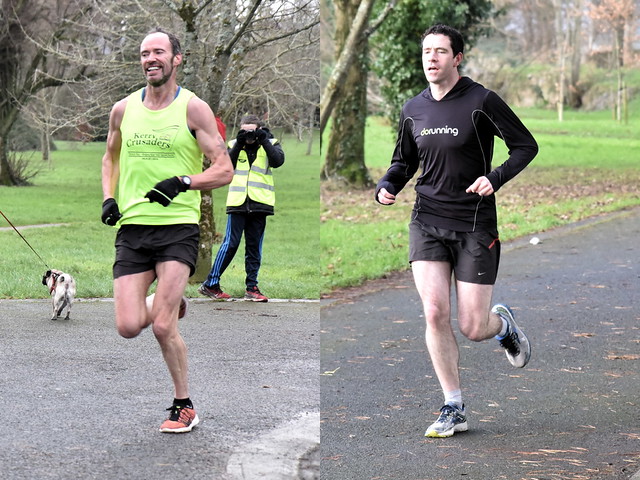 It was one of our visitors that led the field home, Robert Purcell led from start to finish to cross the line with a minute to spare. Not to shabby as he had done the exact same just an hour previously in Listowel. And on Saturday. And nearly every time he runs! Despite his speed, he was a perfect gentleman as he lapped nearly 150 people in a much more crowded park than he is used to! Our second finisher this week didn't have a barcode, and third was Peter Jackson, this week buggy-less, although he's not much slower when he is pushing Kate! 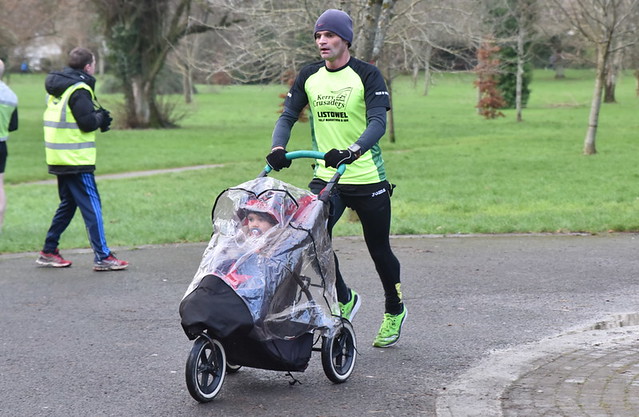 Speaking of buggy-runners, it's worth mentioning that Vinnie O'Leary's combined time for the two parkruns today was a whisker ofer 45 minutes! That's going to be some runner in that buggy! 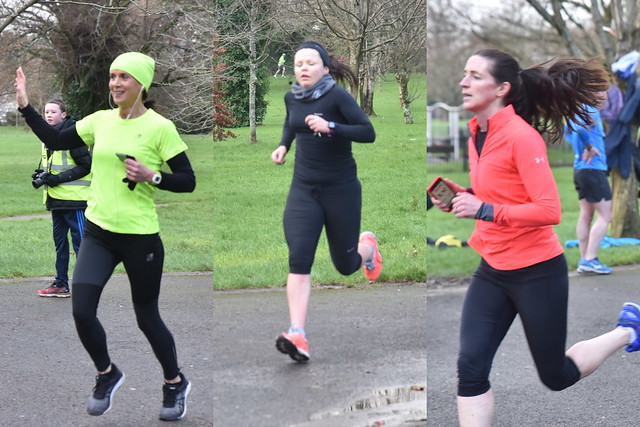 Among the ladies it was Sinead Healy (for the "home team") who finished fastest, just ahead of Ann Horan who was visiting from Porterstown, and Mary Kilkenny Barrett, who ran her best time this year (of course, everyone ran their "best time this year" on New Year's Day!) 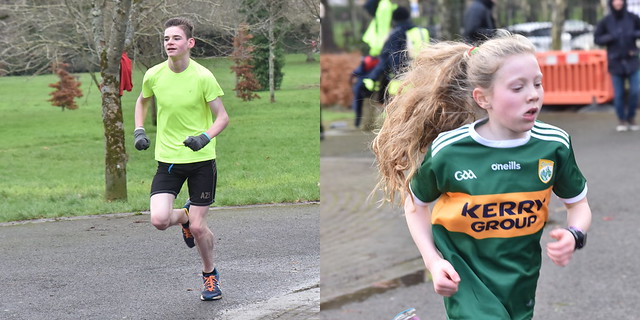 We had almost thirty junior runners, isn't that amazing? Some of these had done four or five of the seven around-Christmas parkruns already. The fastest among them were Luke O'Callaghan and Rachel Mulgrew. Rachel was running her fourth 5k parkrun in ten days, and she was the first junior girl to finish in three of them.

I said Robert led from start to finish. Not quite true, as our own Pa Daly started so fast that we thought it was an unexploded firework from the night before. Of course he couldn't quite keep up with the other rocket, Robert, but his explosive start was enough to see him cross the line in under 24 minutes for the first time with one of the nine Personal Bests on the day. You can see results from Tralee's 154th parkrun here and Listowel's 36th here. 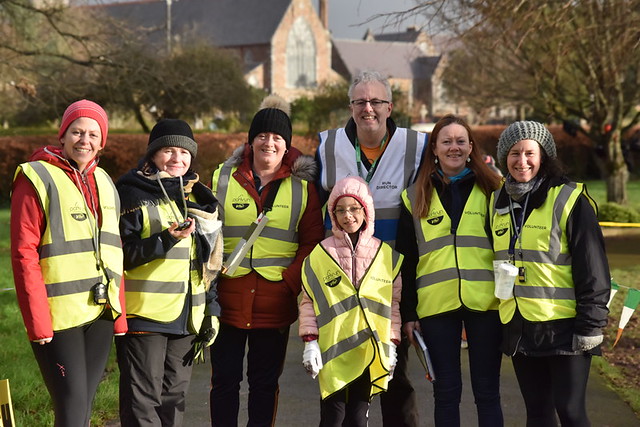 But today was about much more than First Finishes and Personal Bests, it was just a great  morning for everyone who came along, and a great sign of things to come in 2018. Thanks to all who volunteered at any of the events over the last week, parkrun can't work without you.

And thanks to everyone who turns up week in week out, in all weathers, to enjoy a 5K run, walk or jog, or even just to cheer others along, and brings along a sense of fun with them. parkrun can't work without you either.

Already lots of people are asking if we will be doing the same next year. I'd say it's a good bet.

Our thoughts now turn to the much-anticipated trip to Bushy Park in London, where it all began. By now we have almost 80 signed up and some of our friends from Bere Island and elsewhere are going to join us. It's gonna be great!

Happy New Year and let's do it all again in a few day's time!