Well what a weekend to report on. We left South Wales and drove to Birmingham on Friday for our flight to the Emerald Isle for a weekend which promised only to be dampened by the weather forecast. 99% chance of rain in Dublin it said and it was 100% right. Refuge had to be taken several times in the area of Civic Hall through to Temple Bar. Carbo loading for parkrun and Sunday's half was my excuse. Having recced directions on the parkrun site and taken advice on travel we resolved to come by taxi and go back by bus. Stupid plan. The taxi driver got lost. I had to type Beach Road into his Sat Nav and then he drove to the end of the park before I insisted he let us out at the lights. We asked a passing jogger for directions so found our way to the start. Phew! I'm glad we left early.
I had been exchanging notes with a few tourists before coming over and we had agreed Poolbeg was the place to be. I had met Chris Lee of Worth Way Runners at Waterstown parkrun prior to the half two years ago and this was our third meet in Dublin. I love the parkrun family which lets you forge new friendships and maintain them all over the place.Chris was there with Nura and both were running the half on Sunday. Julie was there for the 10K and Shane Chapman another tourist I'd been swapping notes with was also there for the half. This was his third country and he will be in Copenhagen soon to get membership of the world tourists group. I was christening my world tourist shirt today so was in the smug zone.
I saw David was busy doing RD stuff and walked over to Marijke in time to hear her ask Shane if he was me. Unfortunately he's younger and faster than me but it's an easy mistake

We chatted happily amongst ourselves around the set up area and waited for the parkrun fairy to come out to play. It was threatening drizzle but having decided that there were enough cancellations in the UK (60ish) due to weather she said that we we could have it dry and not to breezy on the sea front. Result.
We applauded RD and 50 milestone parkrunner Mark and also Clare Morgan on her 11th visit to Poolbeg as she to qualified for the red t-shirt.
We were called to the line and soon we were off. I planned on a sub 25 as I have to run to heart rate due to a couple of inconvenient conditions so settled down and set out to enjoy the course. It's quite tight on the way down to the path to Sean Moore Park and it was quite busy at the mid to front pack but everyone was well behaved and also very friendly. 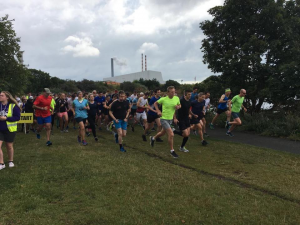 In amongst the 34 first timers I found Patrick Flood all the way from Princess Elizabeth parkrun South Africa via Barcelona where he now lives. 15 locations and 104 events mean he's well travelled on his journey and he now grabs parkruns when he can as there are none in Spain. Que? Nice to see you sir. Going round the park and heading back to the start I bumped into Brendan sporting his #GT5 souvenir shirt. He's doing it again this year. parkrun is obviously a good way of keeping in shape for corporate challenges. He really looks like he's enjoying his run back down the hill later on! 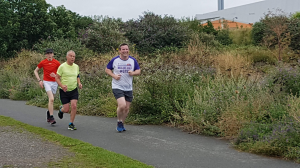 Down to business. I could see the photographer ahead so it was time to look windswept and interesting.Patricia caught my good side and captured the back of my world tourist t-shirt. Thank you. Nice to see you Sunday too. 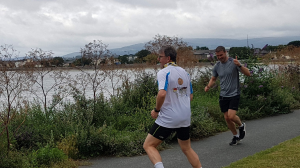 Great cheers went up as we went back through the start line and on our way out to the nature reserve and a little hill. I was really enjoying this. You have such glorious views across the bay and the iconic towers are a joy to behold. Chris Lee was really impressed because he's an avid U2 fan and had seen them on a few videos and album covers. On and on and round and up and up and up and oh just over the crest a welcome sight...turnaround marshal time. What goes up must come down and so it was time to get some flying feet. A quick word to warn certain people of the coming ascent gave me cause to smile as did the look of determination on the face of the father pushing the buggy. I hope the wheels didn't get caught in a rut. Fair play and good effort. 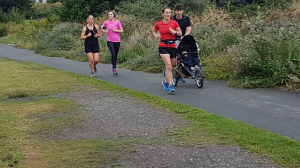 A gentle breeze kept us cool on the way back but taking the second corner in Sean Moore Park it dropped and the humidity turned that area into a mini sauna. Where did that come from?
I picked up with John Devaney on the way back out to the home straight. We focussed on a few people in front and worked our way back towards the finish. We managed to sneak up a few places as he worked hard to complete his 6th event. Apparently he'd had a couple of weeks off but another Mark said he'd been secretly training hard. Nice to meet you guys.
Notes were swapped with a few more tourists and locals alike. Photographs were taken. Naas athlete (and veteran of 233 events there) Michael King was debuting here on his 254th parkrun. This sprightly 65-69 year old snuck in a very respectable 24:24 to become one of nine runners age grading over 70% today. Here he is gliding up the home straight: 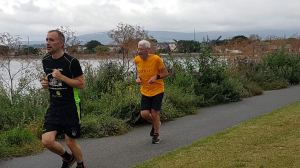 I came second in my category and wondered who had the temerity to run in before me. Turned out to be Steve Shaughnessy in 19:59. VM60-64 and a first timer from Stockport on his 215th run he age graded over 80%. I can dream. That's the great thing about parkrun. We can run for fun - we can race ourselves - we can run with giants - we can compete - we can play. All is possible and all are welcome. What's not to like?
Directions back to the bus were gleaned and we even managed to find Cafe Java for a spot of brekkie before heading back for some more city sight seeing and ale sampling.

Out on the course there were 12 PB's: Briain Moriarty in 19:10 just missed a top three finish by one second but a pb is a pb and gives him slot 160 in the fastest 500 at Poolbeg! 28:43 for Caitríona Nic Góráin. 29:26 for Diarmuid Mckenna. 22:46 for Eamonn Halpin. 30:27 for Jean Gibbons. 19:56 for Joel Luke. 2:04 for Kathleen Clifford. 30:32 for Lara Stone. 20:47 for Matthew Kelly. 31:21 for Noelle Whelan. 20:25 for Peter Lynch. 27:41 for Tara Lavin. Well done everyone
The first three to cross the line for the men this week were Stephen Hurley - Ashley Hayes and Eugene O'Reilly and all are seasoned Poolbeg participants.
The first three females were Katie Rogers - Fiona Bane and Louise O'Reilly. Again all have previous experience and I think there's either a co-incidence or a family connection with third finish!
This week 139 people ran, jogged and walked the course, of whom at least 34 were first timers and nine of those were brand new to parkrun. Welcome to the family and do come back to parkrun soon. The most popular name was "Unknown" Please do remember your barcode people. It's a shame not to have your result recorded but NBNTNE. We saw representatives from 17 different clubs.
The event was made possible and enjoyable and fun by 14 volunteers We can't have parkrun without them and if you want to give something back there's plenty to do. Please just ask. parkrun will be pleased that you want to join in.
Our thanks go this week to: Mari HANSEN • Mark WILLIAMSON • Eoin MERLEHAN • Patricia FORDE • Sharon WOODS • Caroline MURPHY • Julie O'NEILL • Timothy O DONNELL • Fiona BANE • Connal PARR • David MCDERMOTT • Clodagh FAGAN • Margo LAVELLE • Kathrin KOBUS
Today's full results and a complete event history can be found on the Poolbeg parkrun Results Page.
Two token magpies swooped in on numbers 75 and 105. If you've inadvertently wandered off with either please do your best to return. Thank you.
We really enjoyed Poolbeg and it's certainly one to be highly recommended. Wonderful course - great views - fantastic team.
Many thanks and maybe I'll see some of you again.