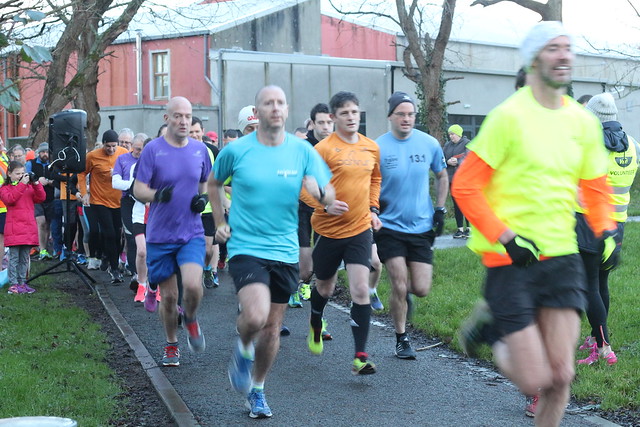 Happy New Year, everyone! And wasn't that a terrific start to 2018? Listowel parkrun combined with Tralee to organise the first ever Kerry New Year's Day Double parkrun event and it was a blast! 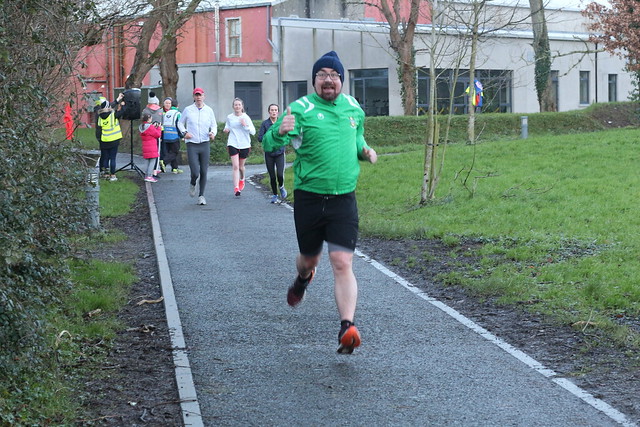 Starting at the earlier-than-usual time of 9:00am, 105 runners joggers and walkers took on the 5K route in Listowel Town Park. As many of the participants were only leaving their home events for this unique event, we recorded a whopping 47 first time finishers. A further 4 runners achieved personal best times in Listowel. 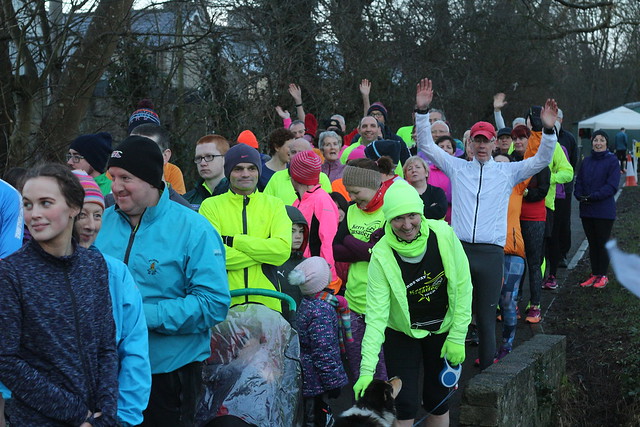 Our numbers were definitely boosted by visits from a huge Tralee contingent as well as a big Newcastle West gang and smaller groups from places as diverse as Macroom, Dublin and, of course, the most remote of them all, Causeway! 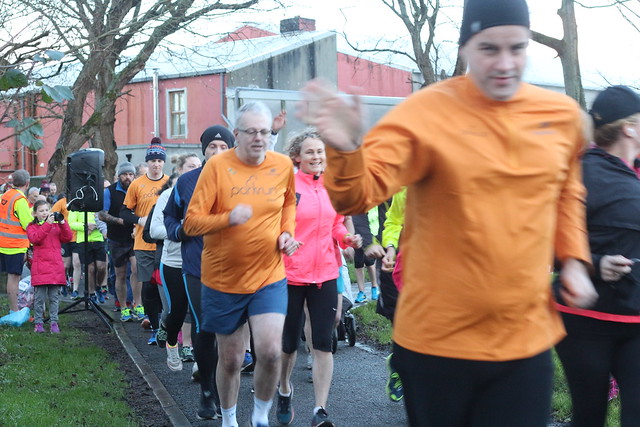 You could feel the atmosphere building from early on. We were delighted to welcome back Tony Higgins, a Tralee stalwart who has been one of our most loyal supporters since we started last April. 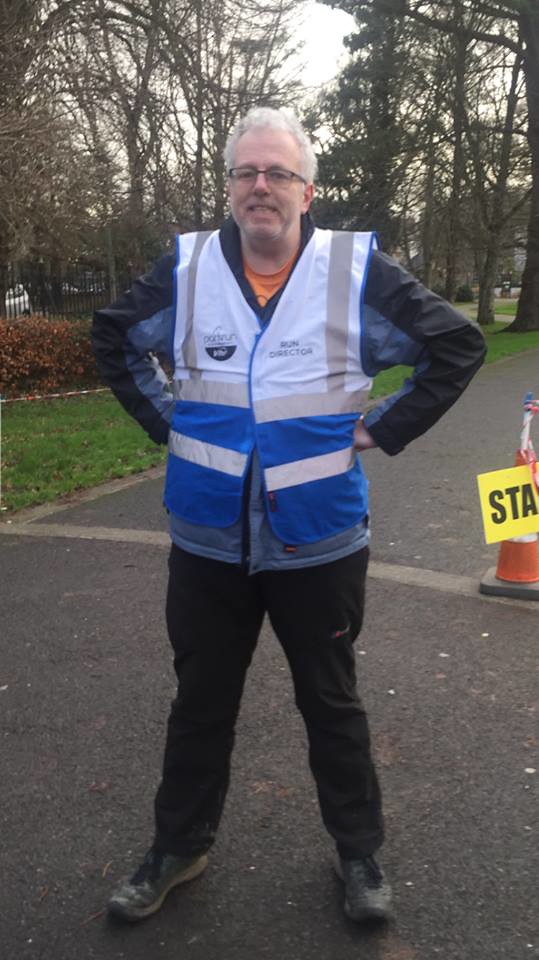 He was our guest Run Director as recently as last Saturday and he was nice enough to show up early this New Year's morning to give us a hand setting up. He got more than he bargained for when an unexpected gust nearly sent our gazebo tent into the Feale, but we got it back up with some weights to keep it down and the weather didn't give us any more trouble after that. Tony later took on the role of RD at the Tralee parkrun where he welcomed 200+ parkrunners, including a massive Listowel party. 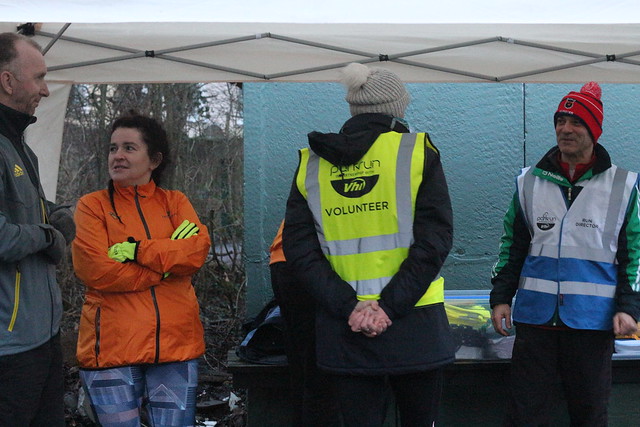 Speaking of the Gazebo, we were also delighted to have the Kerry Recreation and Sports Partnership represented by both it's Chairperson, Listowel core team member Jimmy Deenihan, and its Coordinator, Cora Carrig. 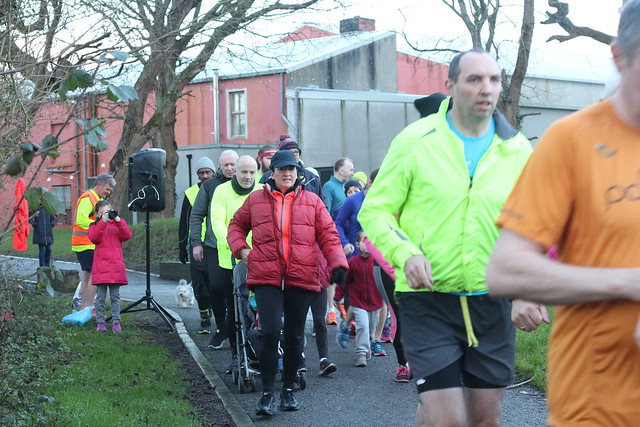 The KRSP is responsible for arranging the gazebo which has been a terrific shelter for our finish area since early on. They also provided the early push to get all 4 Kerry parkruns up and running, as it were, so we were delighted to see both leaders in attendance to help us get our year underway. 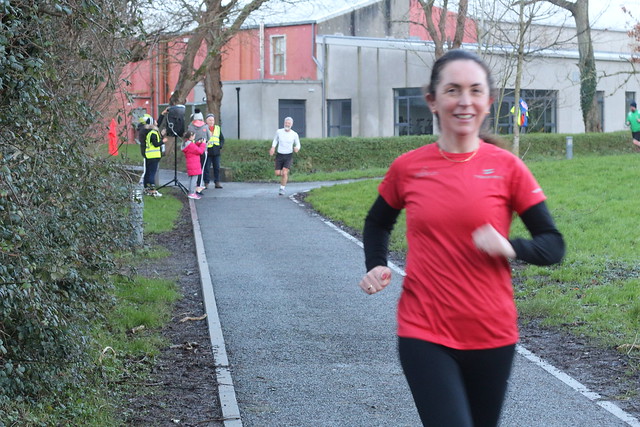 Also on hand were three parkrun event directors. Aside from me, we were joined by Siobhan Kearney from Tralee and Denis Fitzgerald from Newcastle West. Both brought tons of support with them and both completed the double on the day.
Caroline Lynch was missing as she was in her native Dublin attending another New Year's Day double event, but Tralee Junior parkrun was well represented by her husband, Colm and two of her kids. That means the Lynch family managed 4 parkruns in one day! 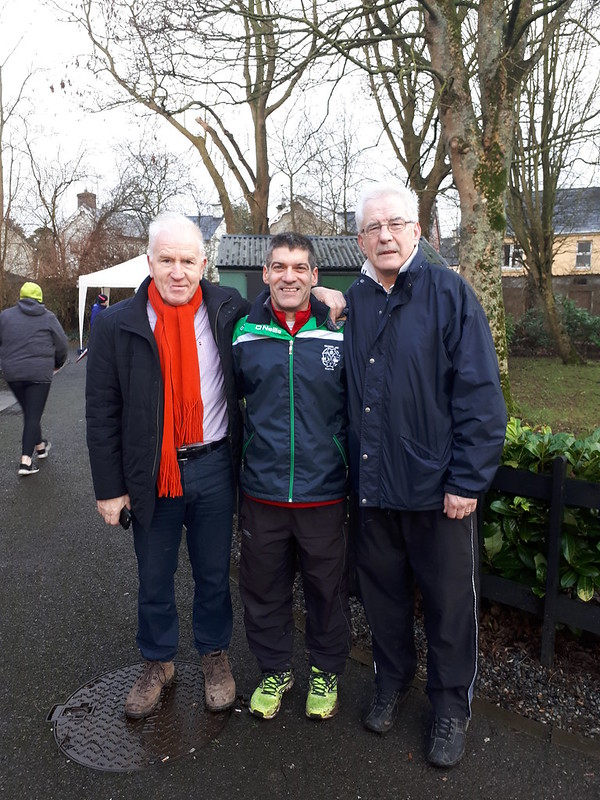 There were plenty of other familiar faces. Jimmy brought along his old Dublin football nemesis, Bernard Brogan Sr. to experience some Kerry hospitality. Of course, he is no stranger to Listowel and we were delighted to see him "home" for the holidays. 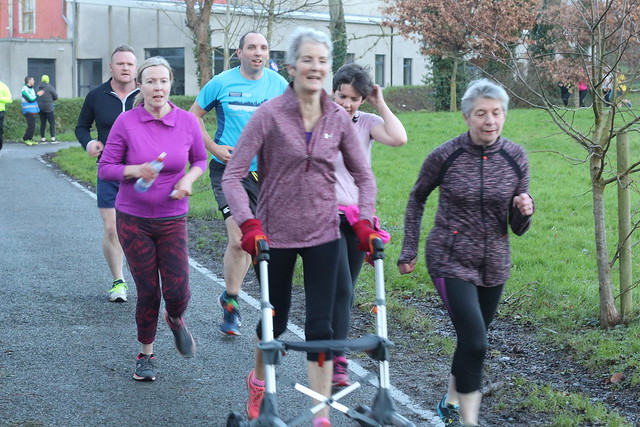 We were delighted at the turnout and we can't wait until the next time we get to see you all, whether it be in Listowel or on the parkrun tourism circuit. Hope 2018 is great for you all! 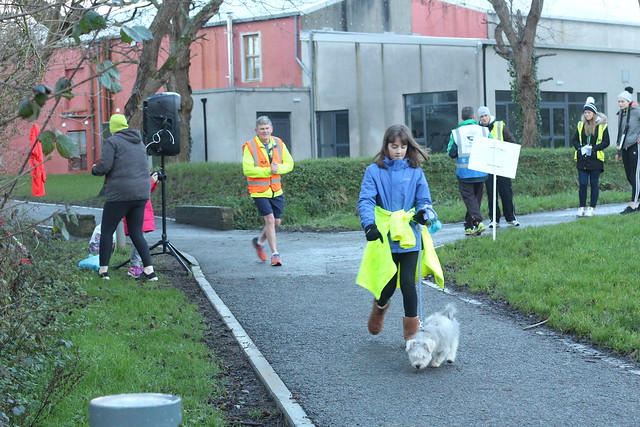 Of course, we must thank the 12 wonderful high-vis hero volunteers who made this unique event possible: 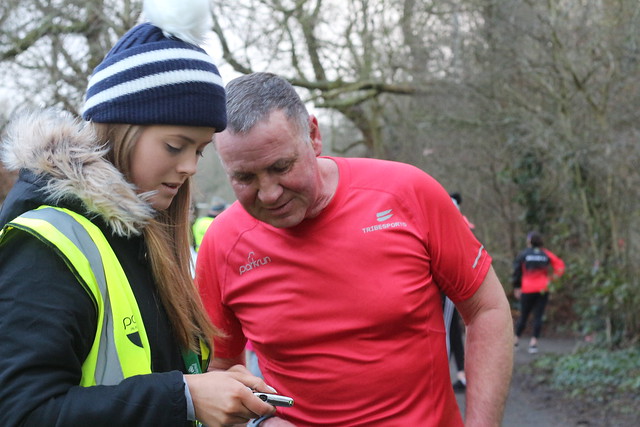 Many of the volunteers at both events gave up the chance of doing the double so everyone else could, so we thank them sincerely. 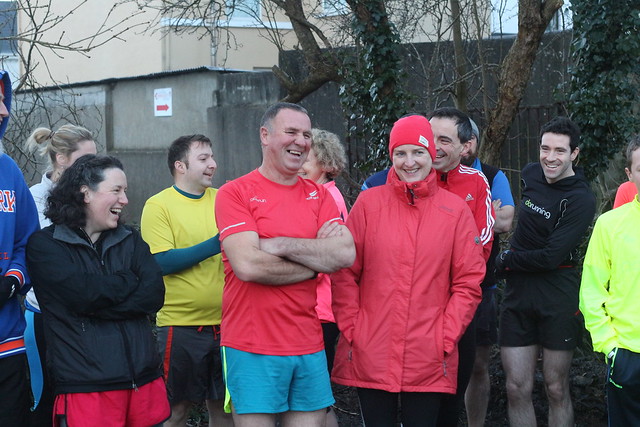 The Listowel results and a complete event history can be found on the Listowel parkrun Results Page. That will only give you half of the story, however, as 80 of the Listowel finishers then headed into Tralee to take on the Tralee 5K course as well, along with several of the volunteers. 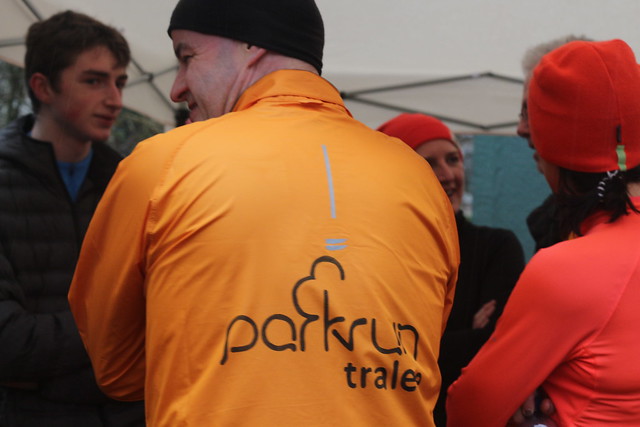 January 1st is the only day in the year on which it is possible to enter two separate parkrun results for one athlete. So 80 people had 10 kilometres of their New Year's resolution done before lunch time on the first day! Well done to everyone. Click here to see the Tralee Results.

You can read more about the goings on in Tralee here. 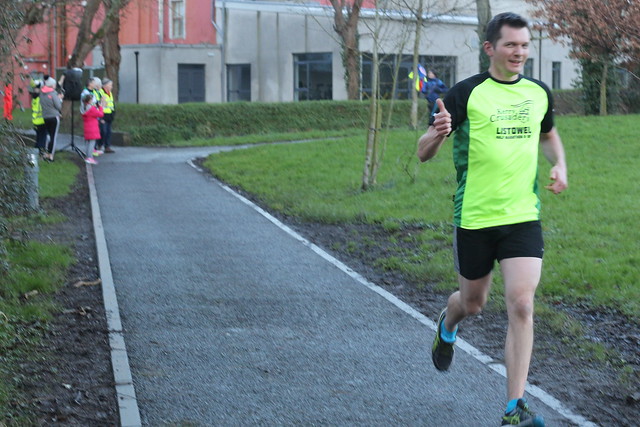 So as we say goodbye to 2017, we would like to thank everyone who made our inaugural year so wonderful. We move into 2018 with the resolve to improve our mental and physical well-being, to spread the word about our beloved parkrun and to welcome as many people as possible into the community. 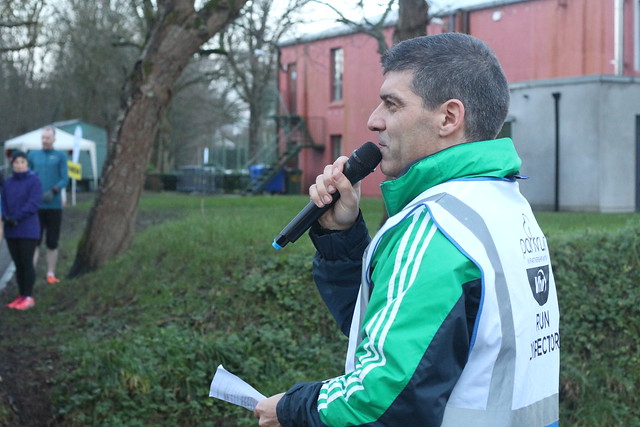 We have a few goals this year which we hope will be achieved. Firstly, we will be fundraising for our own portable automated defibrillator unit which will help keep our event safe. We have been relying on the one housed in the community centre, which has thankfully been good enough so far, but when they are closed, such as on New Year's Day, we have had to make other arrangements and that is not ideal. 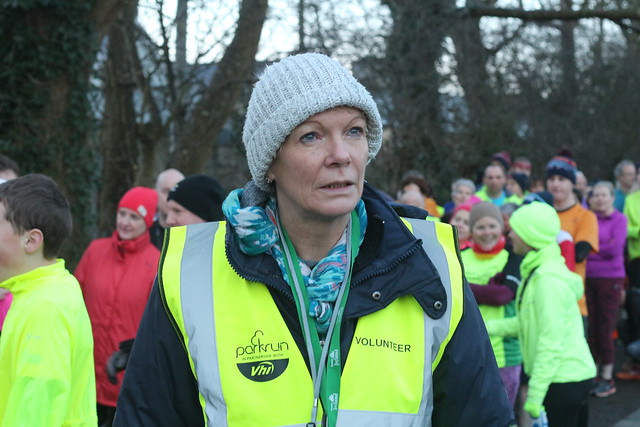 Secondly, we will be looking to acquire a storage unit, again to take the pressure off of the community centre, but also to make the set up and maintenance of parkrun equipment easier for the volunteers. 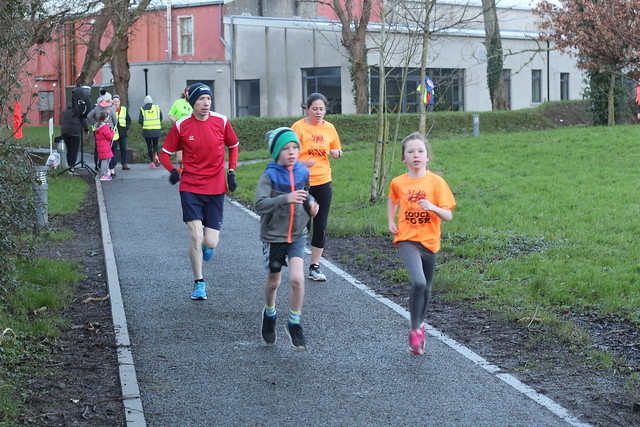 Finally, we will be planning a few special events over the year, including our first anniversary among others. We hope to finish out 2018 the same way we ended 2017, by getting to bed early and taking on the New Years Day double on January 1st, 2019! See you all then! 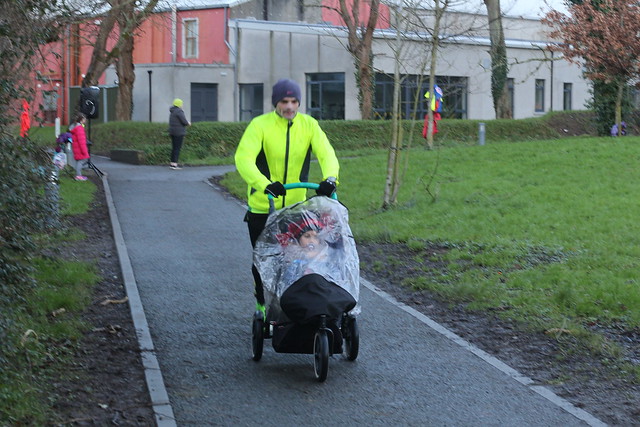 Sincere thanks to you all!