On opening the curtains on Saturday morning, I confirmed once again the poor accuracy of the weather forecasts.  The dry spells were nowhere to be seen, but heavy rain.  Luckily the weather soon took a 360 degree turn to give us a fabulous parkrun morning.

It was fantastic to have a large group from St. Pat’s GAA U11 visiting us.  Every single one of them (including coaches) managed to keep smiling throughout the 5k. We had regular groups from Star of the Sea, Balbriggan Roadrunners and Lusk AC among 15 Clubs running.  The numbers just keep growing, not only in overall participation, but there were over 40 first timers and  26 new personal bests  achieved by the 126 parkrunners. There was even a higher number of volunteers than usual, thank you all.

Erika Nevis and Avril Penrose, local ambassadors, joined ambassadors from the rest of the country to meet Paul Sinton Hewitt (parkrun founder) to launch Operation Transformation’s association with parkrun.  We look forward to welcoming all new walkers, joggers and runners taking part on the O.T. programme in the weeks to come.  Good luck.

There were big smiles all round at the first parkrun of 2016 at Newbridge House.  Regular runners and New Year resolution makers were getting ready, jogging and stretching a few minutes before the start. We couldn’t have asked for better weather; there were just a few clouds to be seen and the sun was shining on our faces to welcome the 97 runners, joggers and walkers.

The two largest groups of runners visiting Donabate parkrun were Rush Runners and Lusk AC, bringing some new faces to the 5km run as well as some experienced ones.  There were also runners from another 11 clubs and running groups.  There were 24 first timers and a whopping 16 new PBs. The first female finisher was Louisa Fahy from Rush Running and the first male finisher was Seamus Rooney from Raheny Shamrocks AC.

In addition to all the supporters taking photographs and all the ‘selfie’ runner enthusiasts, a photographer from the Evening Herald paid us a visit this morning, so keep an  eye on the newspaper over  the next few days, because we might spot a few familiar faces.

Congratulations to all who took part in the first parkrun of 2016 and many thanks to all the volunteers for their invaluable support. If you would like to volunteer, simply email us using the link on our website, post it on the Facebook page or just come to talk to us next Saturday.  Parkrun encourages all runners to volunteer at least once every 10 times you run.

Donabate parkrun is rapidly gaining a reputation as being the sunny parkrun with near perfect conditions for both of our events to date.

The morning was going so well with the new improved signs in place on the course by 8.30 and volunteers and runners starting to arrive in the park. Then disaster struck as the Run Director managed to spill all 300 finish tokens into the car park. Cue above volunteers and runners coming to the rescue and sorting them back into order in time for the start. Thanks for saving the day guys.

We had 144 runners this week of whom 75 were here for the first time. 39 of the runners that returned for a second week recorded a new personal best. Darren Ryan of Lusk AC was first over the line in an impressive new course record of 17:03. Next was Thomas Frayne followed by Dinny Collins. First female finisher keeping her 100% record was Aisling Andrews of Clonliffe Harriers AC with a new best time of 20:40. This was ahead of Elaine Kelly and Eimear Caulfield.

It was great to see lots of local clubs represented and this week we welcomed a big contingent from Fingal Running. A big thanks to the army of volunteers who helped the event to run so smoothly. If you would like to volunteer at a run please email us (quoting your parkrun ID) at donabatehelpers@parkrun.com. None of the roles are too hard and full training will be given on the morning.

Please don't take our finish tokens home. We are missing token no 49 from Saturday. They aren't souvenirs so if you have it please get in touch so we can get it back in time for next week's run.

Below we see Darren Ryan putting pressure on Lead bike, Yannick Chevalier on his way to a new course record. 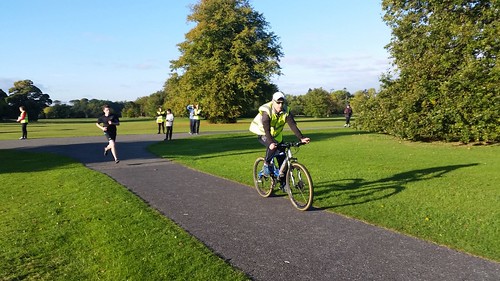 See you next Saturday.

What a great sight it was to see people of all ages streaming through the various entrances of Newbridge Demesne towards the steps of the house. Runners, joggers, walkers, buggy pushers - all 239 of them were here for the first Donabate parkrun. After months of planning and preparation it was finally happening and even the sun was shining. A massive thanks to our volunteers (all 20 of them) without whom parkrun wouldn't happen.

First finisher was Alan King in a time and new course record of 18:49 closely followed by Chris Keeling and Seamus Rooney. First lady across the line was Aisling Andrews (20:59) followed one second later by Kerri Page and then Eimear Caulfield. Over a quarter of the field were new to parkrun and hopefully you will all be back next week or in the near future. It was also fantastic to see so many familiar faces from other local parkruns offering their support. Eoin and Michael doing the honours with some great photos of the event.

There was also great representation from different clubs with Lusk AC topping the list with a huge contingent of 19 runners. Also a special mention to Lorna & Davy who made Donabate their 18th parkrun location.

After the run we retired to The Lady Betty Cobbe Cafe for tea, coffee & scones and agreed parkrun is a fabulous way to start your weekend.

If you would like to volunteer at a run please email us at donabatehelpers@parkrun.com