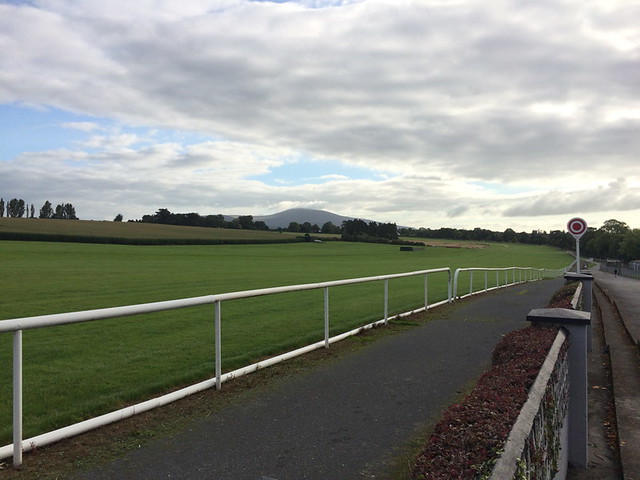 Just three months ago Niamh Byrne brought parkrun to Clonmel, and several of the volunteers today told me how she will be missed, having moved over to Leeds, but there is no doubt that the fantastic team of volunteers will build on the foundations established by Niamh in her short stint as Event Director. 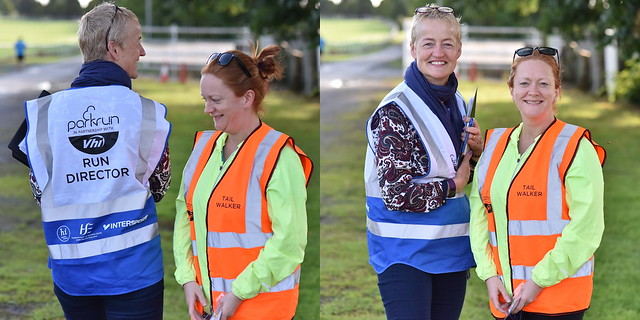 People like Mary Gavigan, today's Run Director and Co-Event Director. Mary asked me if there was anything that we have in Tralee that Clonmel parkrun should be doing. Well, Mary, I think what every parkrun needs is a Mary Gavigan! What enthusiasm and drive! A great welcome for everyone, local and tourist, and an obvious passion for parkrun. 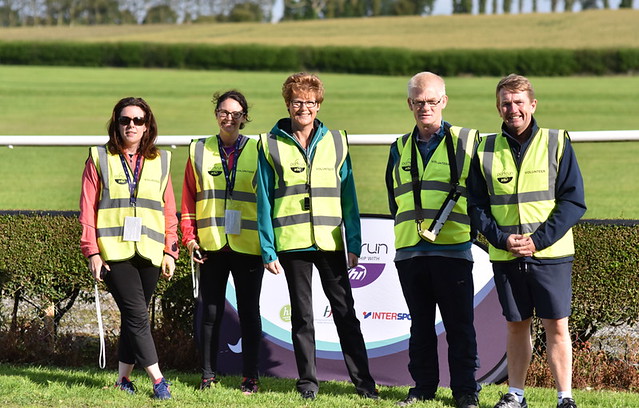 And the rest of today's team - Alan, Helen, Karen, Lisa, Peter, Sarah, Shauna, Michael and William. And not to forget Paula - keeping the Byrne flag flying in style! 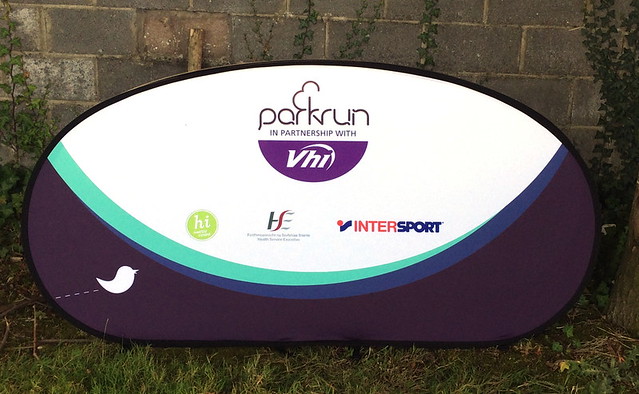 Speaking of flags, today was the first day the new parkrun flag and pop-up banner were unfurled at parkruns all around the country. There was much discussion on Facebook about how difficult it was to fold up the banner - well, come along to Clonmel to find out how Paula Byrne does it in about ten seconds!

I wasn't the only tourist in Clonmel today, there were many from much further afield - these included Nigel Lambert from Oxford - Nigel has visited a couple of times recently and holds the age-grade record for his category - he also has the distinction of being the oldest man to run at Clonmel parkrun! There was Gemma Brennan, who usually runs at Wimbledon parkrun, she won't get a T-shirt for hitting 150 parkrun next week, but it's still worth a minor celebration! We had Louise Norris and Emma Butler from the UK, and Sinead O'Sullivan (Bradford and Woodhouse Moor), and Padraig O'Sullivan made another trip from Ballincollig to see if he could better his time - which he did! 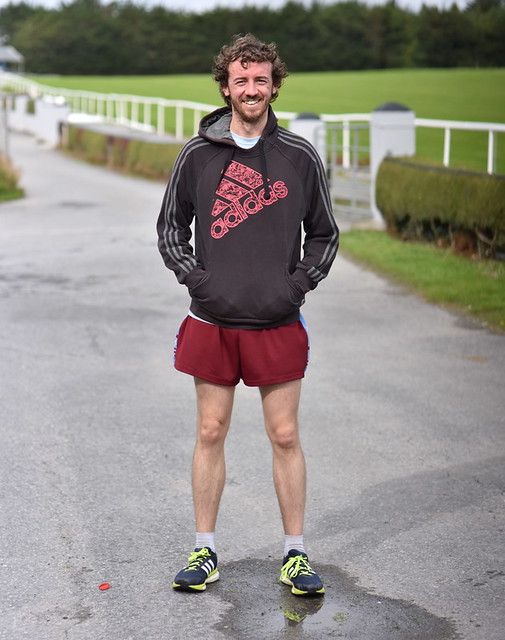 There was a standing ovation (well, we had nowhere to sit down!) for Shane Corcoran, I think he's the first runner to do his fiftieth parkrun in Clonmel! Shane is proper parkrun tourist, with fourteen different venues, and a proper volunteer too, his name has been on the roster 19 times now! Running his 50th today will entitle him to claim the first of his "milestone" T-shirts (when they come back into stock!) - there aren't too many of them in Clonmel yet but come back next year and there will be plenty! He's also not far off earning the other coveted T-shirt, the aubergine "25" volunteer shirt (that's purple to you and me). 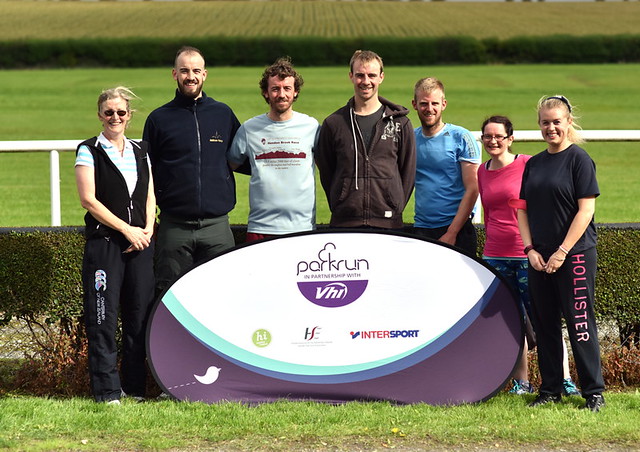 Shane brought a gang of supporters with him, to celebrate his achievement. The Corcoran entourage even helped to sort the Finish Tokens for next week! 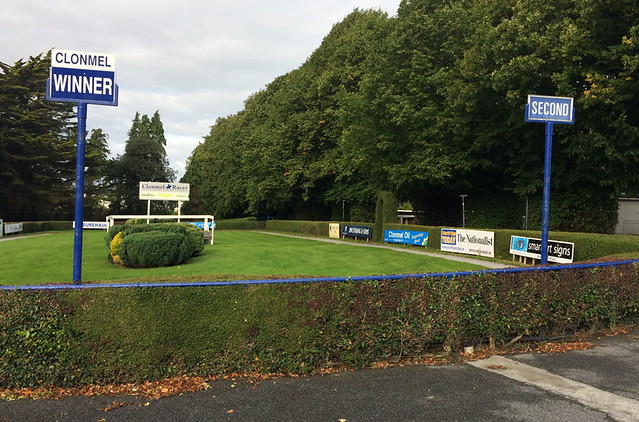 Hmmm. And I though parkrun was a run, not a race!
And just like 100 other locations all over Ireland every Saturday morning, we had our free, timed, 25-furlong run. Well, 24.85 furlongs to be exact, no-one wants to run another five metres! It's a lovey route, twice around the perimeter of the racecourse, luckily there are no fences but there is a looong hill to be tackled twice.

First finishers this week were Andrea Armstrong (another tourist from Craigavon) and Mick Traynor from St. Anne's, who not only finished nearly two minutes ahead of his nearest challenger, but took thirty seconds off the course record! The other half or the Armstrongs, Colin, finished within five seconds of his Craigavon PB in second place.

Alan Quigley and Molly Gubbins were the fastest juniors, well done! (Remember, you guys only have to do ten runs to earn your first T-shirt!)

Also this week were at least ten who tried parkrun for the first time, and hopefully they'll be back for more, the same number of runners didn't have barcode so won't get a time this week, but hopefully they will register and come back next week.

You can see the full results from this week's parkrun here, and the volunteer roster for the next few weeks here - your parkrun is run entirely by volunteers from the parkrun community, so if you'd like to help out give your name to the run director at any parkrun or e-mail clonmelhelpers@parkrun.com with your name and barcode so you can be added to the roster. All the jobs are easy and training is done on the morning at 9:00 AM - it's just as much fun as running!

Thanks again for the great welcome and the chance to have a chat over breakfast in the lovely nearby Gavin's cafe, where the park runners get their own upstairs room to mull over the morning's excitement. The future is certainly bright for Clonmel parkrun!

I'm looking forward to revisiting Clonmel, and in the meanwhile you are all very welcome to visit us in Tralee!

We had 47 hardy participants this morning and nobody drowned in the rain! The weather was torrential but there was smiles all round

well done to everyone who participated this morning in such challenging conditions.

Welcome to our first timers and parkrun visitors to Clonmel, the surrounding areas and further afield parkruns, we had visitors today from Bedford in the UK!

The event was made possible by volunteers. Without volunteers there would be no parkrun. If you would like to volunteer in the future please email us at clonmeloffice@parkrun.com. Roster here for viewing. https://www.parkrun.ie/clonmel/futureroster/

Today's full results and a complete event history can be found on the Clonmel parkrun results page.

We had no missing tokens this week, thank you all for returning your tokens!

Don't forget to register at  (www.parkrun.ie/register) to participate at parkrun.  We had a a lot of first timers today and were delighted with how smoothly it all ran.

Hope to see you all again next Saturday! Walkers and families always welcome as well as runners.

This week was the inaugural Clonmel parkrun with a fantastic turn out of 122  people who ran, jogged and walked the course.

The event was made possible by volunteers. Without volunteers there would be no parkrun. If you would like to volunteer in the future please email us at clonmeloffice@parkrun.com. Roster here for viewing. https://www.parkrun.ie/clonmel/futureroster/

Today's full results and a complete event history can be found on the Clonmel parkrun results page.

We had 2 missing tokens this week, numbers 45 and 99! If you find them please return at our next parkrun.

Special thanks to Matt Shields (parkrun Country Manager), Ruth Shields and Eoin Fegan from parkrun Ireland who trained all our volunteers in last night and helped make today's inaugural event a huge success.

Don't forget to register at  (www.parkrun.ie/register) to participate at parkrun.  We had a a lot of first timers today and were delighted with how smoothly it all ran.

Hope to see you all again next Saturday!