Somewhere in the days before Spotify there was a song with lyrics along the lines of “three is the magic number”. This week at Castletown there was a certain amount of magic in the air, and a lot of numbers that were laying claim to the crown of the most magic number of parkrun event 206.

We had 6 pacers.
We had 13 first timers.
We had a participant from Banagher, but living in London, who was doing his 100th different parkrun. 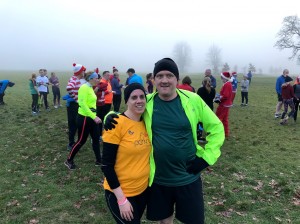 We had 13 first timers.
We had 25 personal bests.
And I’m not certain, but there may have been a turtle dove or two, or perhaps a partridge in a pear tree somewhere.
We had our 145th finisher - who marked the 40,000 parkruns to be completed at Castletown.
That milestone means that we have done 200,000 km of walking, jogging and running at Castletown parkrun over the past 4 and a bit years.
Today we were aided by 30 volunteers.
Now 30 is a pretty magic number for people to pitch in and to help create the event every week.
They are the folks who are wishing you a “Merry Christmas” and a resounding “Ho, Ho, Ho” as you made your way around the course.

There was of course the magic of Santa Claus being our tail walker - and there are some amazing photos on the Facebook page that capture that.
We hope you enjoyed Event 206 on the 21st, and hope to see you all 181 of you again, and more on the 28th for Event 207!

parkrun has some “Special Events” every year - and on the 25th, if you want to run a parkrun, Waterstown parkrun (https://www.parkrun.ie/waterstown/)  is the nearest one to Castletown.
https://www.parkrun.ie/special-events/
On New Years day - possible to do 2 events in Ireland, and a visitor from Cabinteely mentioned that they are starting @9:00 am as are a few other events, and then some @ 10:30 and some @11. The full list is on the page, and you could do Griffeen @9:30, Corkagh @11:00 or the only parkrun in Kildare on New Years day is Kilcock @11.
See you all next week and enjoy the break - until this coming Saturday !!
Declan Hynes
Castletown parkrun
Run Directory Event #206

This week 181 people ran, jogged and walked the course, of whom 13 were first timers and 25 recorded new Personal Bests. Representatives of 17 different clubs took part.

The event was made possible by 30 volunteers: