So, for the Run Report for Event 197, I'll include a smattering of the opening briefing, and then some notes from afterwards...

Good morning and welcome to event #197 here at Castletown parkrun.

My name is Declan, and I’m your run director for today.

Apparently there is another sporting event later today that has some level of importance to folks. Yes - the Manchester Storm are playing the Belfast Giants at the SSE Arena in Belfast @ 7pm this evening.

I’m only kidding - so I need to know if there is anyone here from the land of the long white cloud?

If there are - then “Kia Ora”….if not - then the pronunciations won’t be as accurate as I’d like in the 2nd half of this.

So - first up - we have some pacers this week:

So - everyone has a time in mind, and you can run after them, run with them, or stay ahead of them - or if you want to grab a bib and volunteer then you can become a pacer….it’s worth having a go and helping out your fellow parkrunners.

We had Karl and Claire arrive on the day and offer to take up the pacer bibs - which anyone can do!

I'm going to say that 35 PB's from a turnout of 156 is pretty amazing - it's just over 22%. I don't know if it is a record, but many of those magic letters were, from my biased reading of the results, clustered around the times of people wearing the bibs....so well done everyone!!

Again, a quick thank you to Kevin who did the pre-event check on the course. The report back was that things look okay and the hazards are as normal for the course.

So, as most folks are aware, there are certain rituals around parkrun - as with many sporting events, so I’m going to adhere to a few, and deviate from others… and today I'm going to chat about New Zealand.

New Zealand started their first parkrun in
May 2012. Ireland in November 2012.
NZ - 29 events Ireland - 93
And I would love if that was the scoreline later today

Average parkrun participant time:
NZ: 30 minutes 27 seconds - Ireland - 29:50
However in parkrun terms - slower is better - in that there is broader participation, rather than narrowing it down to people who just run fast - we have people who walk, jog and run - and is an inclusive and welcoming event.

We had 15 first timers, including Lekesha O'Neill, whom we snapped as she was leaving - we hope to see you all again soon! 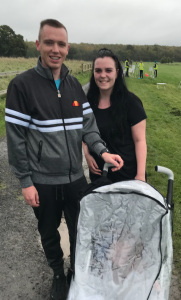 Some of our first timers this week!

I’m told by Jenny - who did the first timers briefing that we have a few visitors this morning - from the following locations:
A) Shankhill
B) Griffeen
C) Naas

So, among the volunteers today is Eamonn - who started parkrun here in June, and has done 13 parkruns in total.
We also have Stefania - who has done 1 parkrun, but this is her 2nd time volunteering as a Marshal.

So - say “Hello!” to both of them on the way around - and thank all of the volunteers for volunteering!

We had some good performances from our first male and female finishers today. Anna is studying in Maynooth for a few months, and is a regular at orienteering so she had no bother finding her way around the course for her second visit. 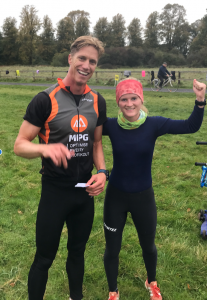 Next week is Halloween, our 4th Birthday, so a good chance to put on a bit of Fancy Dress for the run around, and there might even be cake!

This week 156 people ran, jogged and walked the course, of whom 15 were first timers and 35 recorded new Personal Bests. Representatives of 11 different clubs took part.

The event was made possible by 25 volunteers: