Brickfields parkrun is cancelled on 30 May 2020: COVID-19 (Coronavirus)

There will be a New Year's day event in Brickfields starting at 11am. We are looking forward to starting the New Year with a 5k walk, jog or run, We'll kick off the year on a healthy, local and happy note welcoming all our regulars and all our new parkrunners and parkwalkers. Spread the word that 'Brickfields is a go on New Year's Day!'

Some parkrun events take place  in national parks. Some have spectacular river or sea views but the heart of every event is its community ethos. Brickfields is literally in the very heart of the Drimnagh community. For that reason I was intrigued to make a debut visit to this event.

Well, there were other reasons why I was curious to visit but that requires an apology and an explanation. So, I’m sorry that I hadn’t visited before yesterday’s match (event) number 71. In a previous life I was quite familiar with Brickfields. As both a former footballer and a soccer referee this place was quite a regular haunt for me.

I’m laying it in the line here. I’d no expectation of a pretty setting at all. Wrong. You see, my memory of the park is of a mini Hackney Marshes, for those of you familiar with football venues and parlance. Yes, there are football pitches occupying the bulk of the park but what my former self failed to observe was the mature tree lined perimeter pathway enclosed within the walled railings that is the parkrun route. That’s a yellow card for me then. Set in this neighbourhood Dublin 12 oasis it really is a Theatre of Dreams.

I like to show up at the ground early to soak up the atmosphere. Kudos to the park rangers who were busily tidying the ground for the day’s activities ahead when I arrived. Well done Dublin City Council. Soon after the parkrun volunteers assembled to put the final touches to the pitch surface.

While football is a game of two halves this event is split in to quarters. I’ve no problem with 4 laps of this stadium even if Maria Gaughan today’s team captain, sorry Run Director, doubted the players (parkrunners) capacity to keep score and suggested we might like to raise our arm in celebration after each lap. That would be a 4-0 win then. Today’s nervy 56 players were put at ease with the reassuring pre match pep talk from Maria. Thank you. And just like that the game started and we were playing from left to right.

The man-of-the-match was awarded to Alex Rooney, a mere apprentice in the JM10 acadamy, yet he was receiving his 10th cap today. In keeping with the best parkrun traditions Alex brought the cake for his teammates to celebrate the milestone. The only caveat he said was that we must wait until he returned before eating it. We didn’t have time to pour the Bovril as Alex returned to the dugout in a great time of 41:55. Give that lad a contract.

When the final whistle blew the post match analysis was conducted under the multi coloured bunting at the goal line. It rivalled the Kop for the vibe. In a nice touch the home team provided refreshments in reusable containers. As you do at parkrun you make new friends whether you like it or not. But today I bumped in to an old friend. As you do. We’d toured as part of a football team at World Cup USA 1994. Lovely to see you again Fionnuala MARCHING ON TOGETHER. We must team up again.

In all there were 6 rookies (first timers) today and 15 played their best game (personal bests) yet.

The event was made possible by 10 volunteers. They played a 4-5-1 formation. Here’s how they lined out:

Full scores, tables and a complete event history can be found on the Brickfields parkrun Results Page.

Brickfields can be rightfully proud of its home ground. They’ve a great happy squad of volunteers as we witnessed this week. Clearly the Head Coach Lorraine’s enthusiasm is infectious in their dressing room.

Brickfields parkrun started on 6th January 2018. Since then a squad of 1,510 have assembled, a total turnstile attendance of 5,736 parkruns covering ground of 28,680 km, including 1,243 new Personal Bests. A total of 176 individuals have volunteered 732 times.

I can now safely say I’ve covered every blade of grass and every corner of Brickfields. My eyes have been opened (referees are blind you see) to this fantastic arena. Thanks to the great team it’s guaranteed that YOU’LL NEVER WALK ALONE here. I’ll be back before too long and might even get a season ticket. 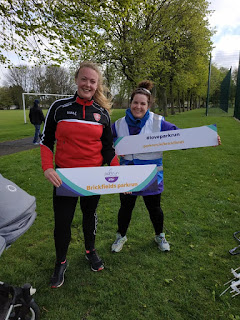 As a visitor to Brickfields from Bedworth in the UK this week, I think I still had the UK start time of 9am in my head. As I arrived to the park at 8.50 and could see no-one. I panicked thinking another run had succumbed to Storm Hannah, but no, a quick lap of the course and I found Run Director Lorraine MITCHELL, out clearing branches and debris ensuring a safe run for all.

It was wonderful to see more women than men running. I don't think I've been to a parkrun before with more Female finishers than Male, so bualadh bos do na mná!

The course it's self is four laps and all on path, meaning it was perfect for the few hardcore parents running with buggies. There were also some very good doggies ensuring they kept their owners on a short lead, and who were grateful of the bowls of water provided at the finish line. 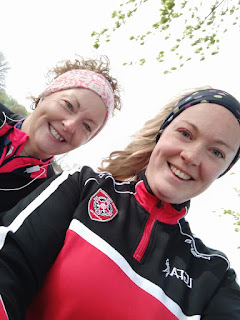 I found the park charming, and actually very quiet. There was very little noise pollution, which is a welcome change, especially in Dublin. There is a fantastic playground, with some beautiful wood carved animals my kids loved. And despite there being no cafe, there was all sorts of refreshments available at the finish line, all brought by the wonderful volunteers. Teas & coffees, and even cake! What is parkrun without cake right?!

As the run started, the wind was fierce. I thought I must be mad pushing my two youngest around in a buggy and dragging my poor Mammy out of her bed, but by 9:45 the winds died down and the sun started to appear through the clouds, making for perfect running conditions.

First finisher was Damian KELLY (19:10) for this first time at Brickfields, followed by experienced runner Colm FLAHERTY (19:57), Conor MCHUGH (20:45) rounded off the top 3.

There were 3 Junior Runners who also deserve a mention, Noah JOHNSON (31:44) achieved a PB, hot on his heals was Rory NULTY (31:58), and first timer Eabhann FARRELL (43:25), hope to see you, and your responsible adults, back next week.

There were no course records set today, but of the 77 finishers there were 12 First Timers, 5 of whom ran their first ever parkrun and 6 PBs were achieved despite the wind. Special mention to Diarmuid MCGOWAN (25:30) who completed the dreaded second run, and Cathy TRENAMAN (31:59) the most experienced runner on the course today (198).

But it's not all about the running, it was wonderful to see so many walkers on the course today also. Following a very successful collaboration with Irish Heart Foundation and Get Walking Ireland for "Park Walk at parkrun", a number of people came and continued their walking program. And that's the wonderful thing about parkrun, no matter what your time, or ability, you will be welcomed and encouraged.

Everyone at Brickfields would be delighted to welcome even more walkers next week, so follow #parkwalkIRE and spread the word.

A huge thank you to the team of volunteers who braved the storm to bring parkrun to Brickfields this week.

Dublin Bay Running Club were delighted to be asked by the core team at Brickfields parkrun  to do a takeover day and cover the volunteer roles. Most of us D.B.R.C. runners come from the Howth area running and volunteering in St. Anne’s and Father Collins parks, however 3 of us who were there on Saturday actually started with parkrun in Griffeen parkrun in Lucan where I have been a run director for the last 5 years.

Thankfully a few of us have been visitors to Brickfields since it started over a year ago now so we were familiar with the route and the very warm welcome extended to us by the core crew and the local runners and walkers alike.

In total there were 8 of us volunteering from D.B.R.C. and were supported and guided by Brickfields own Event Director Lorraine MITCHELL along with Declan O’LEARY, Donal LYONS, Jp LONERGAN, Karen SLYE and Liam FITZGERALD.

We were delighted to welcome several parkrun tourists over from the UK this week, Steve SCOTT from Sunderland parkrun, Gary and Janet SHAUGHNESSY from Newbury parkrun who seem to be on a bit of a parkrun tourist adventure at the moment after completing parkruns in Australia, New Zealand and America. We also had Martin CONWAY down from Cookstown and Kate McDONNELL from nearby Waterstown.

A big shout out also goes to Andy BLACKMAN who completed his 50th parkrun with us on Saturday and earning his coveted red t-shirt and entry into the parkrun 50 Club.

Along with the visitors we also had 11 brand new participants to parkrun join us for the very first time. We really hope to see many of them back again soon. Some of them would have been welcomed from the new parkwalk initiative that was in its second week which serves to highlight parkrun is for everyone at every pace and regardless of where you are you will never be last as our tail walkers bring up the rear of the field.

Despite the strong winds, 11 of our return runners managed to post a course PB on the day.

In total 101 people and several dogs took part in Brickfields parkrun #60 not to mention the 14 volunteers who helped make the event happen. As always everybody was appreciative of the hot cuppa at the finish line on the cold and windy day, hopefully soon we can stand out and enjoy it for a bit longer as the summer comes.

Every week parkrun needs its participants to volunteer to make the event happen so please remember to take a turn every so often, it is just as rewarding as the run if not more so, all the roles are easy and quickly picked up with training provided by the amazing core team and don’t forget with your barcode comes the ability to run, walk and volunteer at any parkrun event worldwide so why not give it a go?

I know your core team look forward to seeing you all back for your free, weekly, timed 5k next week and from all of us at DBRC thanks again for the opportunity to help host your event and we promise we will all be back to run in the near future.

190 runners, joggers and walkers took off on the first 5k Brickfields parkrun last Saturday. The rain held off and by the end of the 5k no one felt the cold air. Wherever you looked around the park, the one thing that was obvious on everyone's face were the big smiles and at the finish line the sense of achievement. The parkrun however was about more than that last Saturday in Brickfields. New friends were made and a lot of people used the park for the first time and got to see the great resource we have on our doorstep. While parkruns are great for a heathy body, a lot of us found out that they are also great for a healthy mind. 'Good for the soul' as one volunteer said!

Sign up and register today. You won't regret it!